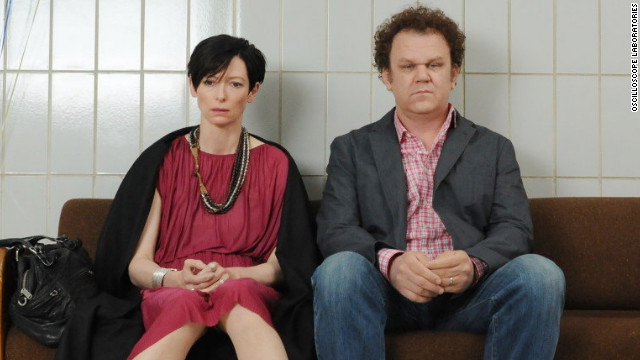 Tilda Swinton and John C. Reilly star in "We Need to Talk About Kevin."

(CNN) -- Is a parent's love for a child guaranteed?

Let's assume for a moment that it is and that parents love their children unconditionally. Is it then possible to love your child but not to like them? What about fear? Can a mother both love her child and also be in constant, mortal fear of them? What about loyalty? Can a mother ever betray her child? What is the proper reaction when one's son commits a massacre at his high school?

These are some of the questions faced by Eva Khatchadourian (Tilda Swinton) with respect to her son Kevin (played by Rock Duer as a toddler, Jasper Newell as a grade schooler and Ezra Miller as an adolescent, all to chilling effect). Presented in a back-and-forth, non-linear and occasionally all-too obvious way, Lynn Ramsey's "We Need to Talk About Kevin" is the ultimate cautionary tale for prospective parents.

As an infant, Kevin screams constantly, to the point where Eva parks his stroller next to a construction site in an attempt to drown out the tyke's wailing. Alas, even the jackhammers are no relief and it's only when being held by his father, Franklin (John C. Reilly) that Kevin relaxes. This is but a snapshot of what's to come and how Kevin will play mother against father in the coming years.

As he ages, Kevin is, to Eva and to the audience, if not to Franklin, increasingly creepy. He refuses to be potty trained well into middle childhood and almost never smiles. He even shows a true malevolence, seemingly taking pleasure in making life difficult for Eva, while acting as Daddy's little boy.

According to flashbacks/Eva's memory, her husband is absolutely clueless when it come to their son, and the couple's relationship is one of the aspects of the film that left me cold. Franklin is kind of a ... dope, for lack of a better word.

When she was younger, Eva was something of a free spirit who traveled the world in a rather Bohemian existence and short of an unplanned pregnancy, I couldn't see anything in Franklin that would have attracted someone like the young Eva. Yet here they are, married and living in the 'burbs, which is exactly where Eva doesn't want to live.

The situation serves to put Eva on edge, which she seems to have been since Kevin's birth, and at one point she loses her temper, breaking his arm. While he covers for her with the doctor and Daddy, it's not in a good way but rather more an "I have dirt on you, Mommy" way.

By this time, Eva is more or less convinced that Kevin is damaged goods and things only get worse when she decides (without consulting Franklin) to have another child, perhaps in the hopes of getting it right, the second time. The resulting daughter Celia (Ashley Gerasimovich) is everything Kevin isn't: happy, effervescent, playful and loving, a daughter both parents can love. Of course Kevin instantly hates her.

"We Need to Talk About Kevin" is full of hints and foreshadowing (but considering much of the film is told as Eva's memory, it could just as easily be called "after-shadowing") and this is where I found most fault with the film. Ramsey's screenplay (written with her husband Rory Stewart Kinnear, from the novel by Lionel Shriver) is a little too obvious and the symbolism is laid on a bit too thick.

Repeated shots of Eva and Kevin dunking their faces into water (seen from under the water), a bow and arrow motif and the endless use of tomatoes, tomato soup, red wine and red paint as metaphors blood are beyond obvious, and the film can hardly be called subtle: The first time we see Celia, she has an eye patch. Gee, I wonder how she got injured?

Tilda Swinton is indeed fantastic and given the long list of awards and nominations she's been racking up for "Kevin" over the past few months, I'd say there's a better-than-even chance of her picking up a second Oscar nomination later this month (she won an Academy Award for best supporting actress for "Michael Clayton" in 2008).

Eva is a tortured soul. She knows Kevin is a bad seed, and can't seem to fix it. She hopes loving him is enough, but she seems to know, deep down, that it isn't.

Then there's the possibility that it's her fault, somehow.

Was she a bad mother? Did she pass on some dormant genetic defect to her son?

Eva starts medicating her anxiety about Kevin with wine and pills, shuffling her way through life in a state of near oblivion, all the while becoming a pariah in what is to her, the ninth circle of hell: The suburbs.

The community blames Eva at least as much as she blames herself and this is another aspect of the film that bothered me. After what she's gone through, it strains believability that an entire town would turn against her because of something her child did, no matter how horrific.

Far more a horror movie than a family drama, "We Need To Talk About Kevin" is an uneven update on the "bad seed" story, kept afloat almost entirely by Swinton's magnificent portrayal of a completely broken mother.

"We Need To Talk About Kevin" is rated R (Restricted. Under 17 requires accompanying parent or adult guardian). The violence is more suggested than graphic but in context, that makes it all the more unsettling.