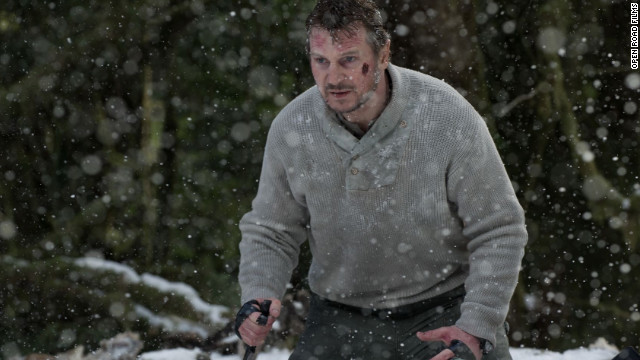 In "The Grey," Liam Neeson quickly emerges as the leader of the men.

(CNN) -- Writer-director Joe Carnahan wisely gets back to basics in "The Grey" after the over the top CGI heroics of "The A-Team."

In their last collaboration, Liam Neeson fell out of the clouds in a tank and lived to tell the tale. This time he's stranded in the arctic wastes of Alaska when the plane transporting a crew of rugged oil drillers crashes in the back of beyond.

The half dozen survivors are in bad shape, with few supplies, no chance of contacting the outside world and little hope of rescue. They have sub-zero temperatures to contend with, howling winds and snow, and the only source of meat on the horizon -- a pack of timber wolves -- has its own ideas about the pecking order on the food chain.

Neeson quickly emerges as the leader of the men. He's a head taller than anybody else and maybe a head smarter, too. He also knows wolves, so he says -- though it's hard to believe anyone on this movie could claim as much. Any animal expert could tell you that timber wolves are more likely to run in the opposite direction than give chase to humans. Compared to a grizzly bear, your typical North American grey is a pussycat.

That's not the kind of animal Neeson and company bump into. These puppies are of the big, bad variety: vicious, lethal and relentless.

Neeson -- perhaps rashly -- decides to abandon the wrecked plane and strike out south, into the woods. He's followed by a rapidly depleting line of the walking wounded, and a posse of salivating lupus.

This is bare bones storytelling in more ways than one, though Carnahan can't resist injecting stray purple pronouncements of existential angst (I kept hoping that one of the guys would get hold of the letter Neeson has stashed in his pocket, the one where he tells the girl who got away he's exiled himself to live with the dregs of humanity, "Ex cons, misfits, a*******... men unfit for mankind").

Fortunately he's a better filmmaker than he is a screenwriter.

Impressively shot in northern British Columbia by the talented Masanobu Takayanagi, the movie feels grounded and real even when the dialogue (and the angry wolf pack) rings false. Interspersing exciting action sequences with tense slogs through hostile terrain, the movie has the structure of a classic western, with wolves standing in for outlaws or Indians. It's old hat, but it still plays.

Neeson's in his element as the raw alpha male who reluctantly takes the others in hand. They include an angry, macho Latino (Frank Grillo), a boring nice guy (Dermot Mulroney) and an ailing black guy (Nonso Anozie) who might as well have "Kibble" tattooed to his forehead. Even though Carnahan never digs up anything very surprising about these stock characters, the terse, shape-shifting group dynamics are enough to keep us watching.

The film's single best sequence comes early on. The plane crash -- and the nicely pitched run-up to it, as the passengers (all men) stow their bravado and start to grapple with what they might be facing -- is a knockout. Five minutes of pure white-knuckle drama. Even though nothing later comes close to it for enterprise or excitement, "The Grey" remains a genuinely gripping survival story and a refreshing change from stale urban action flicks: "Jaws" on paws.