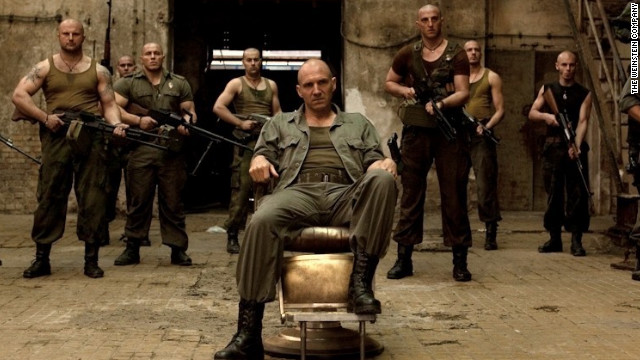 Even if he's essentially a fascist, there is something noble about Coriolanus, and tragic, too, in his inability to bend or compromise.

Ralph Fiennes may have dedicated a good part of the last decade to torturing Harry Potter, but he's also found the time, the energy and the clout to pull off his first film as director.

By any standards, "Coriolanus" is an ambitious undertaking, a modern-day interpretation of one of Shakespeare's meatiest but less frequently performed plays. Although not everything comes off, Fiennes' bold, dynamic movie will make you glad he took up the challenge.

Set in "Some place calling itself Rome," but filmed, very tellingly, in battle-scarred Serbia and Montenegro, "Coriolanus" imagines a modern state rocked by food shortages and border disputes. Gen. Caius Martius (Fiennes) returns triumphant from vanquishing archenemy Tullus Aufidius (Gerard Butler) and the Volsces from their stronghold, Corioles, and takes on the name of this, his most famous victory. But an attempt to make him consul, or head of state, alarms some senators who know his contempt for ordinary civilians.

While he easily carries the Senate, tradition demands that Caius, now known as "Coriolanus," must also seek the assent of the citizenry in the public market. Too proud to court public opinion, he goes through the motions, but when his enemies turn the crowd against him, his fury only makes matters worse and the general is banished from Rome. Alone and angry, he swears vengeance and offers his services to Aufidius.

As in other modern-dress Shakespearean adaptations, there are anomalies and eccentricities in this production, which brandishes guns and tanks but talks of swords and ultimately falls back on knife fights. The notion of the warrior-hero who can carry battles single-handedly doesn't really jibe with modern warfare, and it's been a while since we had a military man as president. Shakespeare's play leaves no doubt that however we value heroism on the battlefield, it's no qualification for success in politics.

Coriolanus is undone by his own peculiar integrity, a refusal to exploit his war record for votes; but only because he finds the democratic process demeaning -- he's a pure elitist, the kind of person who believes that birthright is destiny. In power, he'd be a disaster.

Not that the scheming, cynical professional politicians come out much better in this telling, or the fickle and easily manipulated populace for that matter. Politics is a dirty business, but Coriolanus betrays everyone he's ever known to uphold his own warped sense of honor.

Head shaved, scarred, and often caked in blood, Fiennes is utterly compelling, a kind of Roman Rambo. We know he can play villains, but even if he's essentially a fascist, there is something noble about Coriolanus, and tragic, too, in his inability to bend or compromise. He is his own man, though we see very well that he's entirely the creation of his ferocious mother, Volumnia (a magnificent Vanessa Redgrave), and ultimately powerless before her.

Substantially streamlined by screenwriter and playwright John Logan (whose scripts for "Rango" and "Hugo" also made it to the screen last year), Shakespeare's verse sounds a bit strange in the voice of cable TV newscasters, but the device works very well to convey background information and keep the action flowing. Logan has cut the play in half, but what it loses in detail the movie more than picks up in clarity and punch.

Budget constraints probably account for Rome's surprisingly meager population and a Volsci army that seems to number about two dozen, but you can't argue with the talent in the foreground: Brian Cox, Jessica Chastain and Gerard Butler don't misplace a single syllable between them. This is Shakespearean acting of the highest caliber, and a powerful, bloody vision of "honor" gone mad.