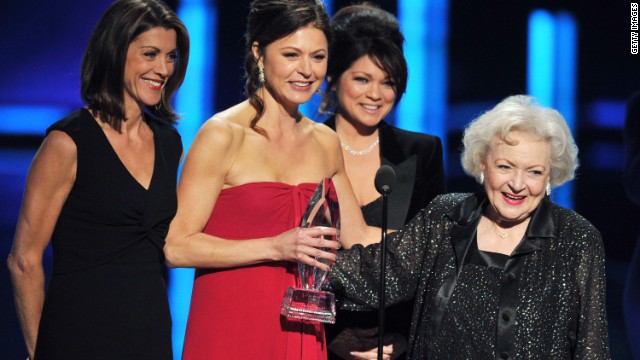 On stage with her costars from "Hot in Cleveland," Betty White told the crowd, "I haven't done anything."

(PEOPLE.com) -- Despite not appearing at Wednesday's 38th annual People's Choice Awards, Katy Perry was the big winner of the night.

Perry, whose 14-month marriage to Russell Brand ended last month, was honored in five categories, as favorite female artist, tour headliner and for song of the year for "ET" with Kanye West, music video for "Last Friday Night" and TV guest star for "How I Met Your Mother."

In a Twitter message earlier in the week, Perry said she wouldn't attend but told fans, "I want to thank u all for voting for me, fingers crossed!"

The biggest ovation at the event, which was broadcast on CBS, went to Betty White, who is celebrating her 90th birthday. On stage with her costars from the best cable comedy show winner "Hot in Cleveland," she modestly told the crowd, "I haven't done anything."

Among the other winners in the 43 categories, "Harry Potter And The Deathly Hallows: Part 2" took four awards -- favorite movie, action movie, book adaptation and ensemble movie cast, although no stars from the film attended.