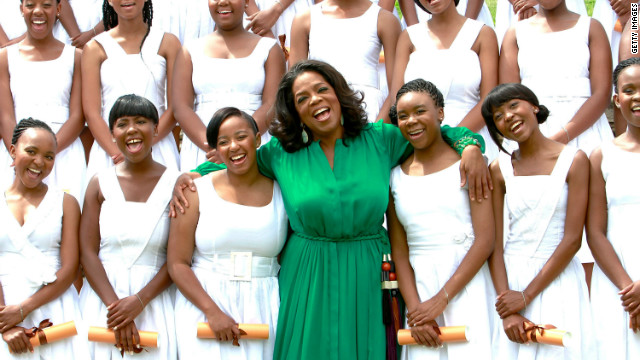 Oprah Winfrey flew to South Africa to attend the first graduation ceremony at her all-girls academy on January 14 2012. 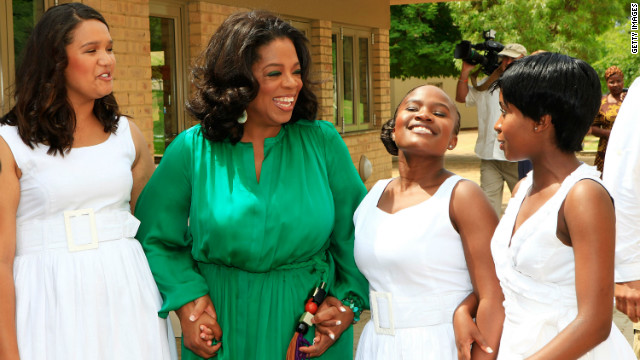 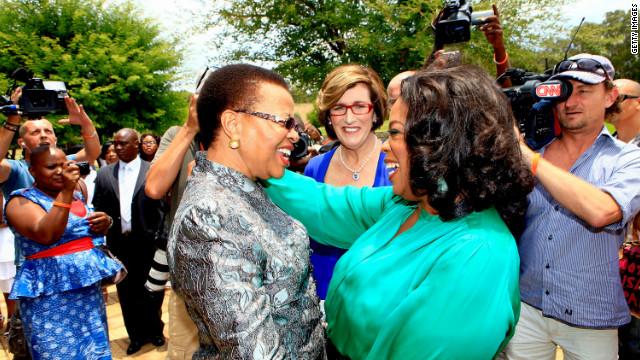 Winfrey greets Graca Machel, the wife of former South African president Nelson Mandela, on her arrival at the inaugural graduation of the class of 2011. 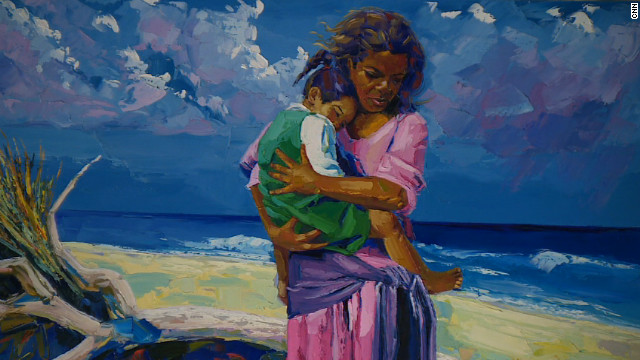 Winfrey said she feels like a "proud momma" as the academy graduated its first class. 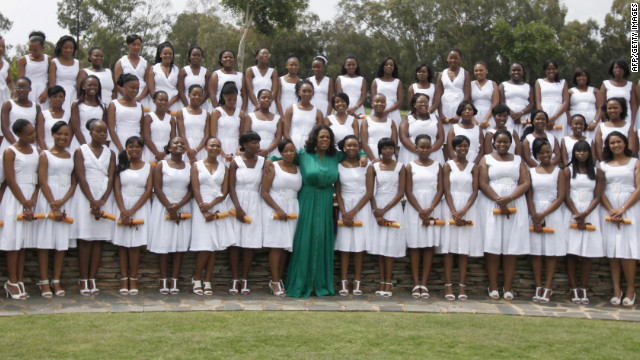 The 72 graduates are heading to prestigious universities in South Africa and the United States. 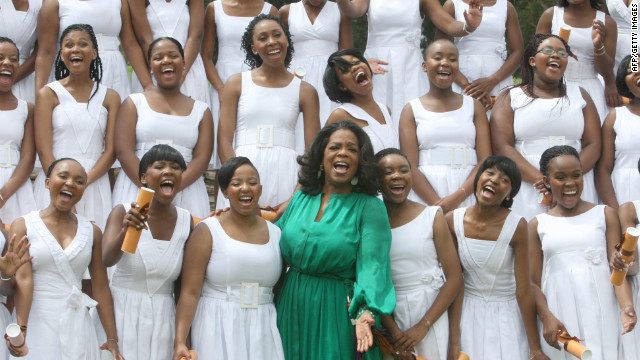 The students of the school are offered free tuition, accommodation, uniforms and meals and have access to its state-of-the-art facilities. 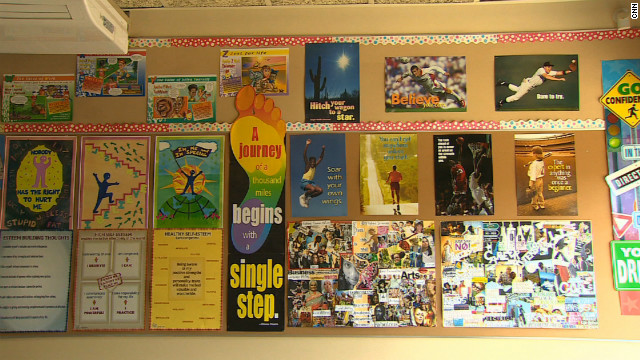 The walls of the classrooms in Winfrey's academy are plastered with posters that advocate the "You go, Girl!" attitude that Oprah is known for. 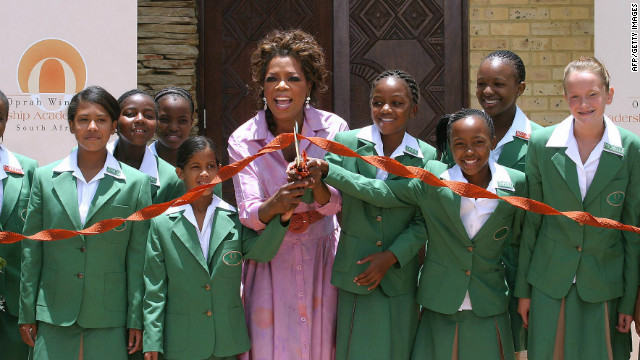 Winfrey opened the $40 million school on January 2 2007 in Henley-on-Klip near Johannesburg. 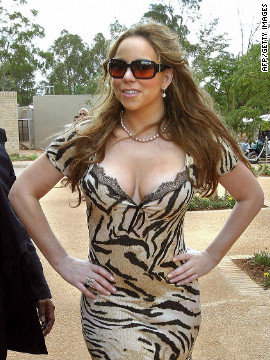 Singer Mariah Carey was among the celebrities attending the opening of the school in 2007. 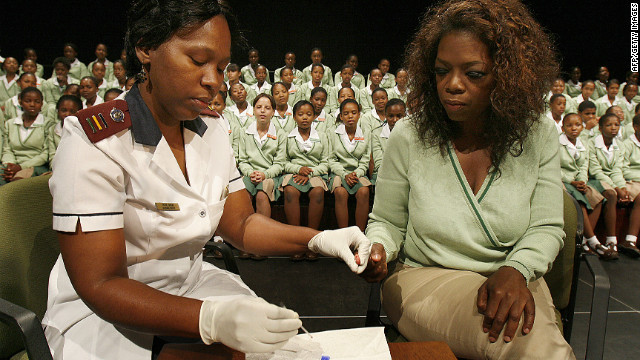 The TV presenter takes the first HIV test at her all-girls academy on Janaury 6 2007.

(CNN) -- Surrounded by the white-clad students of her all-girls academy, Oprah Winfrey is glowing with pride.

And just like many mothers at a graduation ceremony, the talk show queen cannot hold back the tears as the girls she calls her daughters stroll across the stage to accept their diplomas.

"I am one proud mama and for once I think I know what that feels like for real," Winfrey told CNN before the graduation of the first class of her South Africa-based school last week. "It feels like a real sense of accomplishment -- it is a triumph indeed, considering where all these girls have come from."

The famous TV presenter had every reason to be jubilant: back in 2007, she had personally hand-picked all these students as she established the $40 million Oprah Winfrey Leadership Academy for Girls to provide world-class high school education to underprivileged children from South Africa and teach them leadership skills.

Five years later, the 71 graduates of the class of 2011 -- all high-achieving young girls that had experienced poverty and personal trauma such as violence, molestation, or loss of a parent -- have all been accepted to continue their studies at universities in South Africa and the United States.

It feels like a real sense of accomplishment -- it is a triumph indeed, considering where all these girls have come from.
Oprah Winfrey

"When I look at them, I see where they've been, I see where they've come from. I know how hard it is to come up from nowhere and nothing and have almost no support and to have suffered, not one or two but on average five, six traumas by the time you actually get in this school," said Winfrey.

"And now 100% of this class has been accepted into colleges, 10% going to the United States, I mean, that's pretty incredible."

Rating the impact of Winfrey's school

Prior to the graduation, the girls received intensive financial planning counseling and assistance to help them with life beyond the academy, school officials say. A mentoring program has also been put in place to offer them advice during university.

Overall, the boarding school, which spans 52 acres in the small town of Henley-on-Klip near Johannesburg, accommodates some 400 South African girls of any race, color or origin aged 12-18. The students are offered free tuition, uniforms and meals and have access to the academy's state-of-the-art facilities, which include modern classrooms, computers labs, sport fields and a 10,000 volume library.

But for all its success and money spent, Winfrey's academy has not been without its controversies. A few months after opening, the school was rocked by an abuse scandal when one of its matrons was accused of molesting students. The women was later acquitted in 2010.

Last year, a student concealed her pregnancy and then secretly gave birth at the school. The baby died and was later found in the student's school bag.

Winfrey, who lost a child as a teenager and has spoken publicly about abuse she suffered at a young age, said it was her faith in the girls that kept her "steadfast" and "stimulated" amid all the challenges.

The 57-year-old media mogul, who now runs her own channel, appropriately titled OWN, said her next mission is to continue championing the rights of young girls to a better education.

She aims to use the experience garnered over the last five years as a "force for change" to give educational opportunities to more girls from poor backgrounds in other countries and help raise the next generation of female leaders and entrepreneurs.

"You want to change the world, you change a girl's life," she said. "What I intend to do now is ... take that model and to use it in the world to change the lives of 250 million girls around the world who can't get an education, who don't have any asset other than their bodies to use and therefore they're sold for dowries, they're sold off into slavery, they're married at 11 and 12 years old."

You were born in the year that apartheid ended in this country. That means that you are a child of freedom -- there is no bar.
Oprah Winfrey

Winfrey, who overcame economic hardship as well as racial and gender challenges to become one of the world's most successful and influential women, says education can help girls from all backgrounds to raise their aspirations.

"In the beginning I think we had teachers who were like, 'oh, the girls, they come here disadvantaged.' So we've eliminated that word disadvantaged, because disadvantaged allows other people to look at you like you have some kind of disease and they lower their expectations for what you can be.

For this "proud momma," the possibilities are endless for her girls.

"You were born in the year that apartheid ended in this country," Winfrey tells her school's students. "That means that you are a child of freedom -- there is no bar."