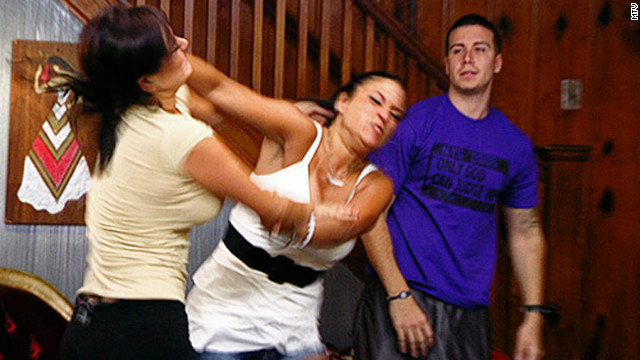 Sammi Giancola and Jenni Farley fight during the third season of "Jersey Shore."

Who needs scripted dialogue when women are willing to physically and emotionally exchange blows for the camera?

MTV's "Jersey Shore," the mega-hit known for both male and female brawls, featured yet another bar fight on Thursday night's episode. Despite hyping the altercation between cast member Sammi Giancola and a female club-goer in a promo for the show, the scene was treated like any other segment.

The genre has become more about shock TV than reality TV, said Steve Carbone, who runs the spoiler site Realitysteve.com. That said, "If you're shocked by what you see (on reality TV), you shouldn't be," he said.

For almost a decade, viewers have watched 25 to 30 women vie for the attention of one man each season on ABC's "The Bachelor." And if the majority of catfights on reality TV have taught us anything, it's that viewers love watching women fight over a man.

So what's shocking about the current season's villain, Courtney, who said she'd like to "verbally assault" and "rip another girl's head off"? Carbone rhetorically asked. "People, two years ago, were saying the exact same thing about Vienna."

Mary McClelland, who contributes to the reality TV site Reality Tea, said viewers are still shocked by cattiness and girl-on-girl violence despite no longer being appalled by it.

"Viewers almost revel in it ... in an excited way," she said, adding that stories about catfights on reality shows elicit the most comments on Reality Tea.

Judging by the comments, people seem to be annoyed by the constant cattiness on such shows, McClelland said, adding, "Maybe people like the cringe factor."

And so producers routinely cast women who will be controversial.

As Shaunie O'Neal, the executive producer and star of VH1's "Basketball Wives," wrote in a commentary for CNN.com in July, "I'm not a big supporter of the bickering, drink throwing and fighting, but when you put a group of strong, independent and vocal women who are going through or just came out of a bad relationship together, there's bound to be a little drama."

"More and more people are starting to realize how scripted some of this stuff is," Carbone said. "Not in terms of words, but in unscripted drama. They're not telling people what to say, but they're giving them a situation where they know what's going to arise."

That's exactly what happened when VH1's other reality hit "Love & Hip Hop" found Chrissy Lampkin and Kimbella Vanderhee in the same room. What began as a verbal disagreement ended with flying fists and exposed lady parts.

"Viewers like to find a character to dislike," McClelland said. "People like to have sides. Like with 'The Real Housewives of New Jersey' -- Caroline (Manzo) vs. Teresa (Giudice). Fans are into that."

Who could forget Giudice's infamous "last supper," in which she flipped a table over.

"There's over 100 (reality shows) with all of the cable programs," Carbone said. "You almost have to outdo the others to get noticed."

The aggression appears to have amped up recently. A study out of Brigham Young University published in 2010 stated that "reality-television programs contained high levels of verbal and relational aggression, but almost no physical violence. Such 'meanness' is so frequent, that it is almost expected in reality programs."

And shows like Oxygen's "Bad Girls Club" are built around mean girls and fights.

These shows clearly have an audience. However, Carbone said, that doesn't mean viewers are desensitized to girl-on-girl violence. If they were, he said, producers would move on to a new attention-grabbing storyline.

Which raises a frightening question: What does a show have to do for us to say, "Oh, we've never seen this on reality TV before"?