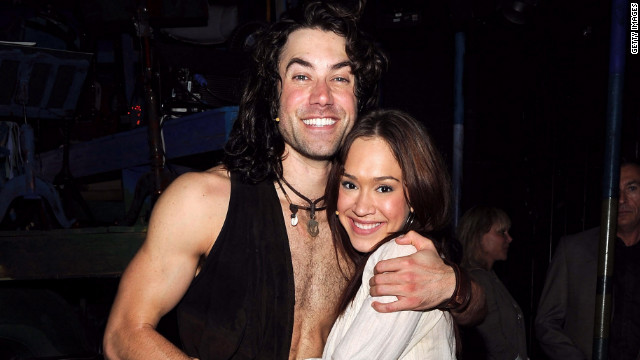 (PEOPLE.com) -- Nearly two years after falling in love, "American Idol" alumni Ace Young and Diana DeGarmo are opening up about their relationship.

Season 5 heartthrob Young, 31, and season 3's runner-up DeGarmo, 24, met in the spring of 2010 when both signed on to costar in the Broadway revival of the musical "Hair."

"We became best friends through 'Hair,' ironically not through 'Idol,' " says DeGarmo, who now plays as a New Jersey Mob boss's daughter on the CBS soap "The Young and the Restless." "It just blossomed into a beautiful relationship."

The attraction was immediate for Young, who, along with DeGarmo, had to get naked onstage for each performance of "Hair." "She said, 'You're not looking, right?' " Young says of the first time they disrobed in rehearsals. "And I was like, 'Oh no, not at all.' But I was looking, and I was like -- sold!"

But Young had his eye on DeGarmo before that moment. "I was already interested in her as a person before I got to see her with no clothes on," he said. "But [that] sealed the deal."

After the musical closed in June 2010, Young, 31, returned to L.A. while DeGarmo, 24, went on tour with the musical "9 to 5." The time apart was difficult, Young says: "If you love somebody, whenever they're not around, it sucks."

So when DeGarmo's tour ended last summer, Young found a way to keep her close.

"She came to California and kept saying, 'I'm looking [at] apartments,' " he recalls. "And I was like, 'Why don't you just stay with me?' The moment she got here, she realized I wasn't going to let her get an apartment. It was like, either we're doing this or we're not. And, thankfully, she was all in."

Adds DeGarmo: "I crashed on the couch -- more like, I crashed in his bed -- and just didn't leave."

These days, the couple's not only living under the same roof, but working together. They recently formed a music group with two friends called All Access, and Young, who earned a Grammy nomination for co-writing "Idol" pal Chris Daughtry's hit "It's Not Over," is also producing country songs for DeGarmo.

"She's my best friend," he says. "To be able to dive in with Diana and help create songs that [tell] her story is amazing."