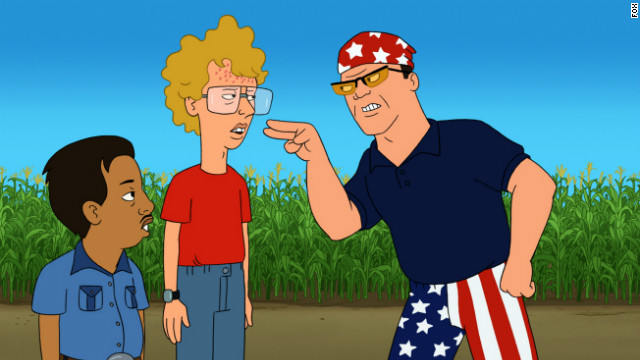 "Napoleon Dynamite" is surfacing as an animated series set for a six-episode first season to air during Fox's Sunday night block.

(CNN) -- It may seem weird that the 2004 low-budget breakout comedy "Napoleon Dynamite" is surfacing as an animated series, but for writer/director Jared Hess, it's not that odd that his world of Preston, Idaho lives on.

"We were approached about doing a sequel but at the time it didn't feel right," Hess told CNN. "There's so much low-budget charm in the first film, that it would be hard to recreate that in a live action way in being able to use a real budget."

Real discussions on turning "Napoleon Dynamite" into an animated series began more than two years ago, when Hess met with "Simpsons" veteran Mike Scully. The pair assembled a pitch and a writing team and are now seeing the fruits of their labor -- a short, six-episode first season, airing during Fox's "animation domination" Sunday night block. Whether or not the show will continue past this initial short order remains to be seen, but Hess and his staff are busy writing more episodes in the event that they get picked up. So how does the process of turning "Napoleon Dynamite" into an animated series work?

CNN recently spoke with Hess from his home in Salt Lake City where he explained just that.

CNN: When did the idea to turn this into an animated series start gestating?

Jared Hess: There were different stages, obviously, but it kind of happened when we were shooting the movie. But we didn't know anything would happen with the movie at the time. It was just a pipe dream. It really was my wife's idea; we started work on this about two and a half years ago. That's when we met up with Mike Scully. He was already a huge fan of the film and I was a huge fan of his work on "The Simpsons."

CNN: The normal thing for a live action show is you have to shoot a pilot before it gets picked up. How did it work in this case?

Hess: You do a little animation presentation piece to showcase what an episode would look like, design-wise. Initially, back in the day, for "King of the Hill" and stuff like that, it was a two-minute stencil animation test to show what it would look like. Over the years, they've ponied up more money because they want to see it fleshed out. We actually did a nine-minute pilot presentation, with a story arc and everything. We did that about a year and a half ago. Based on that and addition to a pilot script and other artwork to make a full packet, they decided to order a season or not.

Hess: Especially with the animation. One episode, from the time you write it to the color, it takes about nine months. Just doing an animation presentation, that was about seven to eight months. Once you get picked up, you have to start hiring people.

CNN: With "The Simpsons," "King of the Hill" and "Family Guy," they had to start out getting an audience interested in their world. But we already know the "Napoleon Dynamite" world. How does this show materialize?

Hess: We have a staff of about 12 writers and we all lock ourselves in a room; there's a couple of dry-erase boards, some sticky notes and we just start pitching potential story lines. We zero in on the ones that we think will be the most funny. "The Simpsons" is coming up on its 500th episode and we have a couple of people that are longtime "Simpsons" people that are working on our show and they've been valuable. We'll pitch something and they'll be like "I think we did that Season 10, episode 5."

We actually wrote a lot of the scripts as a group for this first season in getting the right tone and what we wanted to establish for the show. After we have a script, we get a draft of notes, and then do a table read with the cast as well as people from the network and people that just want to come in and enjoy it.

It's a room full of people and we're reading it out loud and in character. After that, we get one more set of notes that we try to turn around pretty quickly and then immediately go and record all the voices. You cut together an audio track -- almost like a radio show -- and we cut it to the length of the episode and that goes to the animators and they start storyboarding to the audio track that we recorded. Then we get an animatic back and we give notes on that and once we've locked the animatic, it ships off to get animated.

CNN: One of the things about the film is that it doesn't rely on bad language, raunchiness or sex jokes. But the Fox Sunday night animation block certainly does in its various ways. How does "Napoleon Dynamite" continue with its style in this case?

Hess: We've been very aware of it and we're working hard to maintain the innocence that people responded to in the film and keep that. Fox already has shows that do that and we can be our own thing without trying to imitate what the other's do.

CNN: Who do you see enjoying this show? Who is the demographic?

Hess: I haven't been able to isolate that into age group or cultures. I think it boils down to people's specific sense of humor. And the film demonstrated that for us.

CNN: What are some of the upcoming plots that you're excited about?

Hess: We have one where Napoleon gets a job at a liger breeding facility and that one's a lot of fun. That was the first episode we wrote as a group, about a year ago. One of my favorites is where we have ... in Preston, my hometown, they do this thing every year called the bed races, where it's this annual tradition in the town around Christmastime, where everyone races beds up and down Main Street. We've got an episode about that which is super funny. We also have a Future Farmers of America episode, where we had to get their official approval. We sent them the script and they were like, "Well, there's some inaccuracies here about the soil-judging competition but we'll let it go."

CNN: Did you ever win a bed race growing up?

Hess: No, I actually didn't. I filmed the bed races for my Eagle Scout project. I did a little video for the Chamber of Congress. [Laughs.]

CNN: Are you working on any new scripts or any new movies?

Hess: I got a project with Lorne Michaels' company that I'm hoping to do this year. It's a heist comedy based on these people that pulled off the second-largest cash heist in U.S. history back in 1997/1998, in North Carolina. It's a funny, ridiculous story.