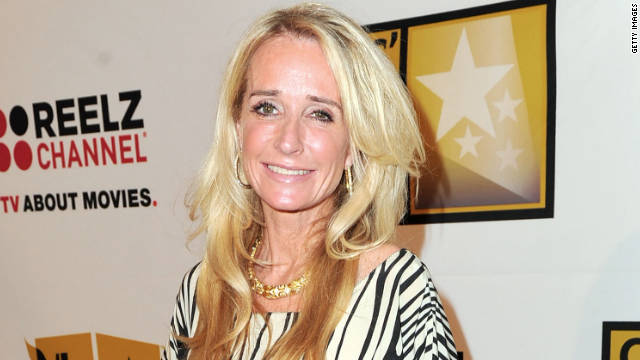 (EW.com) -- After watching Kim Richards' bizarre behavior on "The Real Housewives of Beverly Hills" for months, we finally know the reason the reality TV star was acting strangely, and why she checked into rehab in early December.

It's not so much of a surprise to "Housewives" fans who watched Kim's sister Kyle Richards accuse her of that very fact way back in season 1. But the scene from the reunion is shocking for a different reason: This is the most poised we've seen Kim since season 2 began. It's been a long time since we've seen Kim calm, in control, and subdued -- here's hoping rehab helped the troubled reality star.

Now, if only the other "Housewives" cast members could be as poised. That's right -- it looks like we're in for another doozy of a Housewives reunion, folks. We have Kyle referring to herself as the C-word, Lisa presumably talking about Brandi's desire to sleep with her husband, and Kyle seemingly calling another cast member "Angry Spice." (Probably because she never got her money back for this.)

And, of course, we can expect plenty of talk about Russell Armstrong following his suicide: Cohen even asks Taylor if she ever considered whether or not he was murdered. "The Real Housewives of Beverly Hills" reunion airs January 30, February 6, and February 13. Check out People's exclusive clip here.