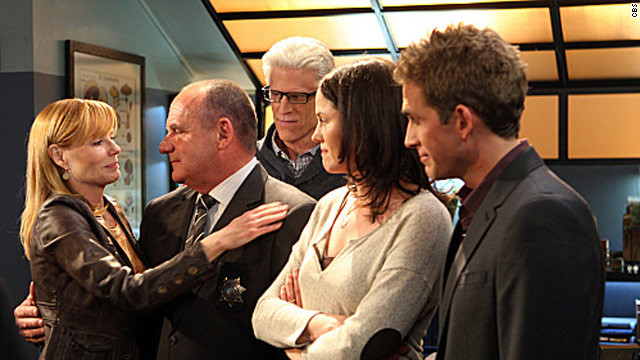 In preparation for Marg Helgenberger's last episode of "CSI" -- which aired on Wednesday on CBS -- EW talked to the 53-year-old actress about becoming the third original star (behind Gary Dourdan and William Petersen) to depart the long-running crime drama, as well as what she'll miss, and whether she'll ever come back.

Entertainment Weekly: You say goodbye to the other members of the CSI team in the last scene of your final episode. Was that by design?

Marg Helgenberger: Yeah. I had asked for that to be the last scene 'cause I knew it was gonna be a really intense scene and I just didn't want to play it before anything else. I don't know if pressure is the right word, but I felt like a big bubble over my head, like, "This is an important day in my life." It's been such an incredible journey. I just wanted to make sure that...I said the right things.

EW: How did you think it went?

Helgenberger: I was really happy with the way it went. I mean, the scene, I had tweaked it. They had written it, but I tweaked it and they were okay with that. They said, "Really, whatever you want to say." My boyfriend said several times, "That was just really, really special." I mean, I knew that I was probably not gonna feel that kind o' love. I mean, who knows? I hope to have another experience like that in my career, but that was a rare experience to end [my time on] the show that I still have enormous love for and respect for and pride and all of that. It was great. It was beautiful. It was really beautiful. Every time I've like thought about that day and leaving, I well up. Jorja Fox had written this card for me with a polar bear on it -- a photograph of a polar bear. What she said in the card was so beautiful about how I'm an endangered species and blah, blah, blah. It was just so moving. So I just feel so blessed to have had this experience all these years.

Helgenberger: Well, it was originally supposed to be the end of last season. And Carol Mendelsohn had kind of begged me. She said, "Do you think there's any way I can convince you to exit, not [at] the beginning of the next season, but into the next season? I just think it's better for the show, it's better for you, you can get more attention." I was open to it because I wasn't exactly quite ready, but this time, I was. And I can't tell you how many times they tried to convince me to change my mind. I mean, even 'til the last night of shooting, they were just, "Anytime you want to come back, and if we write this great episode," and so on and so on. I just have to recharge my battery, step back, and reassess. It's been a long time. Time plays with your mind when you're on a show like that. Twelve years is a very long time. My son was 9 and he's now 21 and he's working in the production office. A day hasn't gone by [during] which I didn't enjoy myself. I mean, there may have been certain locations that sucked, there might have been certain story lines that I didn't really like or the hours, whatever, but there was always something that happened during that day -- shooting day -- which made me laugh. I don't leave going, "I gotta get out of this job."

EW: But it was hard work, right?

Helgenberger: Oh my God, yes. In the first few seasons, there'd be days that were like, 16, 17 hours long. The killer thing about "CSI," especially in those first few years, is that it's supposed to be the graveyard shift of this crime unit in Vegas. So it was so much at night and it just, three, four, five in the morning, in these ungodly locations. That scaled back, especially after season 5. I had it in my contract not to be worked after midnight, but then sometimes I would let it slide.

EW: Think back to the making of the pilot. What were your initial thoughts about "CSI"?

Helgenberger: I just thought it was a really special 21st century Sherlock Holmes. All the technology and science kinda was the star. And that had never really been, and that the criminalists became the heroes as opposed to cops or feds or whatever you had seen in series before. It felt effortless -- that's a good word for it. And it just felt like, I've done a series before, "China Beach," and you kinda know when there's like chemistry on a pilot and you know when there's chemistry all around and there's a little magic dust sprinkled over something.

EW: How did you feel about Catherine being an ex-stripper?

Helgenberger: In the pilot she was described as a single mother and ex-stripper. But it was never really addressed. So the producers said, "You know, we're just gonna do away with that backstory and we think she should come more out of like some sort of generic [background]." I don't even remember what they were pitching. I said no, I think that it really says a lot about who this woman is, 'cause it takes a lot to go from that kind of career to this completely different career. And so they acquiesced pretty easily.

EW: Talk about when Billy Petersen left the show.

Helgenberger: I was very upset that he left. I mean, it wasn't like I didn't see it coming, 'cause he had been wanting off the show for a while. He was pretty vocal about it. He can be a bit of a grump and we used to call him Grandpa, to his face, 'cause he just would always complain. Not in an outrageous way, but he just always seemed to have a complaint or two or three about something or other, whether it was working too many hours or he didn't want to be in this scene or something. So it was clear that he was wanting to go, like, way before he even left. In fact, I was kind of surprised he stuck it out as long as he did. I think it was into the second season, possibly [third], but in his trailer, there was like this molding or something and he started putting down the episodes, like he was kind of obsessed with how many episodes he was stuck having to do still.

EW: Your thoughts on Laurence Fishburne?

Helgenberger: It was a different show with Laurence than it was with Billy. In many ways, it kind of became a darker -- I don't know if I want to say darker, 'cause there were plenty of dark episodes when Billy was around, but the character that they created for Laurence was one in which he, initially -- I don't know if he had a certain type of chromosome or something [that] he shared with people who have a trait to be serial killers or something like that. So you're already stuck with a dark character, so where do you go from there? But Laurence is a very powerful actor, and I enjoyed working with him.

Helgenberger: I love working with Ted. He's just so -- well, I don't know if this is the right way to describe it, but he's so light and fun and loose, yet just a really solid actor. He's really, really a good actor and just a great guy and quirky. He's been a lot of fun this season. If I was really open to it, I definitely would have stayed because of Ted. He's just so easy to work with.

EW: So you're open to coming back? When?

Helgenberger: Well there are only nine episodes left, because they're already shooting episode 13. So that would mean they'd have to start figuring out a way to have me come back now, after this big arc I just had. I'm burned out. I just have to, like I said, regroup.