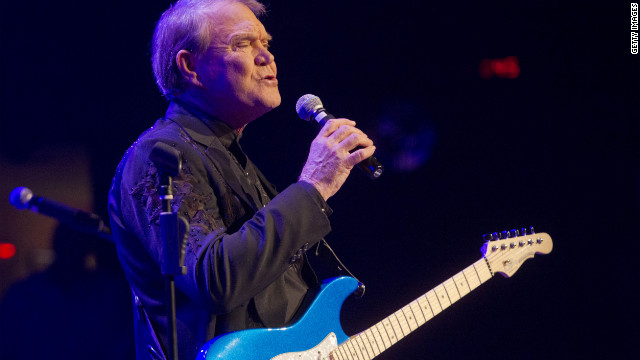 Glen Campbell performs during The Goodbye Tour in early January in Nashville, Tennessee.

Los Angeles (CNN) -- Music star Glen Campbell, who launched his "Goodbye Tour" last year, will be honored with a special tribute at the Grammy Awards next month, a source involved in the show said.

Campbell, 75, revealed in June that he had been diagnosed with Alzheimer's disease, but he has continued to tour with several of his children backing him up.

"I am flattered, I really am," Campbell told CNN in a recent interview concerning the Lifetime Achievement Award with which he'll be presented by the Recording Academy during the Grammy telecast next month.

Campbell, who won five Grammys during his recording career, will be joined by current Grammy nominees Blake Shelton and The Band Perry for a live performance, the source said.

"All I wanted to do ever since I could remember was play my guitar and sing," Campbell said. "I guess if you stay up there long enough, they will give you something."

Campbell began his recording career as a Los Angeles studio musician in the late 1950s, lending his talents to many hits. He became part of the renowned "Wrecking Crew" of musicians.

He released his first solo record in 1962, but his career skyrocketed with the 1967 release of two songs that made music history. "Gentle on My Mind" was awarded two Grammys in the country category, while "By the Time I Get to Phoenix" was honored with two pop Grammys.

Other major hits followed, including "Wichita Lineman" in 1968 and "Galveston" a year later. He hit the top of the country chart again in 1975 with "Rhinestone Cowboy" and with "Southern Nights" in 1977.

John Wayne was so impressed with the Arkansas native that he cast him in his 1969 big-screen classic "True Grit." Campbell's acting earned him a Golden Globe nomination for "Most Promising Newcomer."

Campbell became a television star when he hosted a summer replacement show on CBS in 1968, which led to the "The Glen Campbell Goodtime Hour," debuting in May 1969.