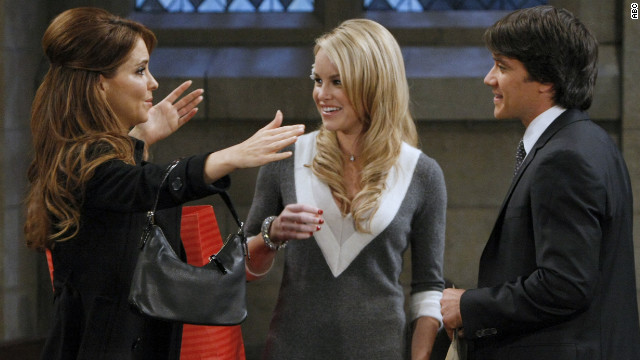 (EW.com) -- Though "All My Children" and "One Life to Live" are history, "General Hospital" -- for now -- is firmly ensconced in ABC's daytime lineup.

But since ratings aren't as strong as they used to be -- the show's averaging a 1.1 rating among adults women 18-49, down 21 percent from last year -- and given how Katie Couric's syndicated talk show is coming to ABC stations this fall, it's still possible that the good people of Port Charles may lose their home in daytime.

But it could have a future in primetime: EW has confirmed that ABC entertainment chief Paul Lee is pondering one scenario that would allow the soap to air as an evening summer series. Not a bad thought, right?

Granted, it's not exactly a new idea: CBS used to air primetime specials of "The Young and the Restless" that averaged anywhere from 11.5 million to 13.7 million. But those aired in the '90s, when there was far less competition for eyeballs. Even then, the network realized they weren't exactly bringing the house down so it stopped airing them after 1998.

It may be hard for ABC to pull off financially. At a reported $200,000 per episode, a primetime episode of "GH" is still a lot cheaper to make rather than an original for a scripted show (which can ring in at well over $1 million). A move to summer nights would certainly buy ABC some good will with daytime fans, who are still reeling over the cancellations of "AMC" and "OLTL" -- especially since a plan to continue them online was quashed late last year.

Did reality TV kill the soaps?

There's always the chance that "GH" would stay put, but that's looking unlikely. Back when Katie Couric's talk show deal with ABC-Disney was announced, the company also said it would be giving the last hour of daytime back to its affiliates in September 2012. That's the hour currently occupied by "General Hospital," which airs either at 2 p.m. or 3 p.m. across the country.

Once it gives that fourth hour back to the stations, ABC will only have three to fill but four shows to do it with -- "The View," "General Hospital," "The Chew" and "The Revolution." (Couric will be airing on the ABC owned-and-operated stations).

There's a chance that one -- or both -- of the latter programs will fail, which means "GH" could continue to have a spot on the lineup. But lifestyle shows, unlike soaps, are more relevant and profitable. For one, they are cheaper to make. Two, they can spawn side businesses like cookbooks. The same can't be said for the aging daytime soap genre.