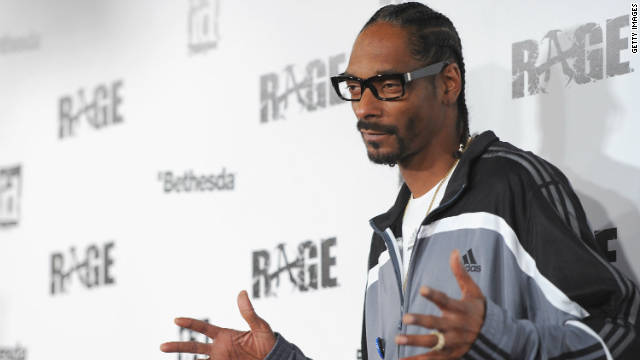 Snoop Dogg is an outspoken proponent of pot and is known to have a license to use prescription medical marijuana.

Snoop Dogg, whose real name is Calvin Broadus, "freely admitted" that three prescription bottles filled with marijuana cigarettes were his, a statement from the Hudspeth County, Texas, Sheriff said.

The entertainer's representatives did not immediately respond to CNN's request for comment.

The rapper, like Nelson, is an outspoken proponent of pot and he is known to have a license to use prescription medical marijuana in California.

The bust happened early Saturday at his bus approached the U.S. Border Patrol Checkpoint located in Sierra Blanca, Texas, at the U.S.-Mexico border about 85 miles southeast of El Paso, the sheriff's statment said.

"During a routine check of U.S. citizenship the inspecting Border Patrol agent detected the odor of marijuana emitting from the inside of the vehicle and requested the driver to pull into the secondary inspection lane for further inspection," the statement said.

A drug-detection dog sniffing inside the bus "alerted to a trash can located at the rear of the vehicle where a red prescription bottle containing rolled marijuana cigarettes were located," the statement said. Two other containers with marijuana, weighing in all total of 0.130 pounds, were also found, it said.

"Snoop Dogg freely admitted that the marijuana belonged to him and he was placed under arrest by U.S. Border Patrol agents and detained," it said.

He was cited for possession of drug paraphernalia, given a court date of January 20 and released, the sheriff said.

Willie Nelson settled his November 2010 Hudspeth County pot bust with a plea deal that reduced his marijuana possession charge to possession of drug paraphernalia and imposed a $500 fine.

The west Texas prosecutor who handled Nelson's case had suggested Nelson, a treasured icon in the Lone Star state, could pay just a $100 fine if he'd serenade the court with his 1975 hit "Blue Eyes Crying in the Rain." The judge quickly vetoed that offer.

"You can bet your ass I'm not going to be mean to Willie Nelson," Hudspeth County Attorney C.R. "Kit" Bramblett told CNN at the time.

Bramblett was in court Monday and unavailable to comment on how he might handle Snoop Dogg's prosecution.