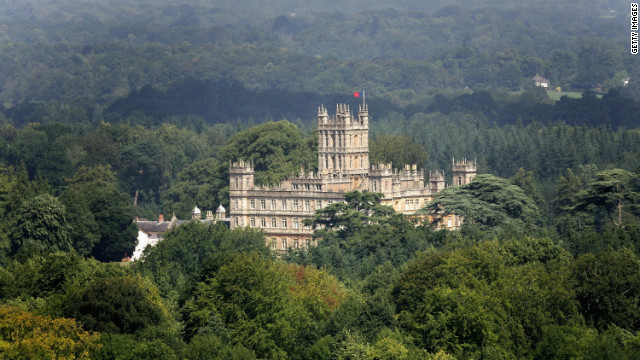 The show is filmed at Highclere Castle, which is located amidst 1,000 acres of parkland near Newbury, England. 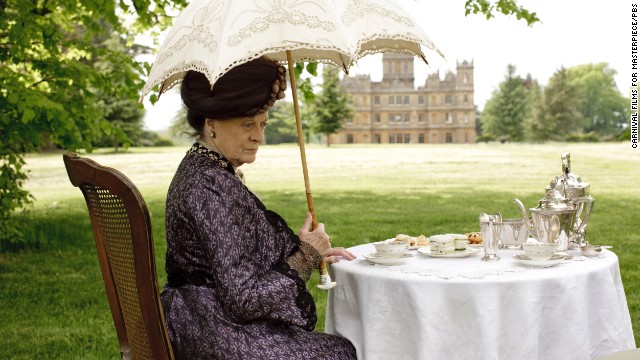 The gorgeous grounds of the castle are a big allure of the show. Here, Dame Maggie Smith, who plays the Dowager Countess of Grantham, has tea outside. 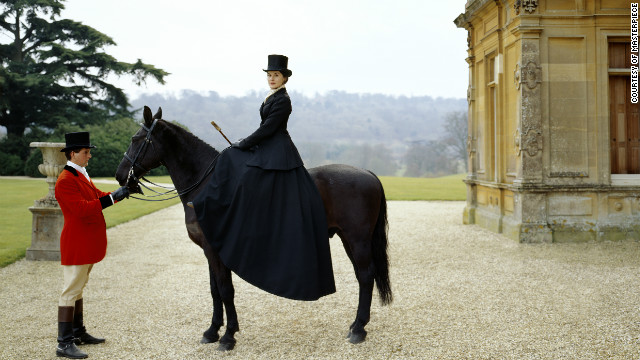 Viewers are also enchanted by the lifestyle portrayed in the series. Here, Lady Mary Crawley (played by Michelle Dockery) goes for a ride. 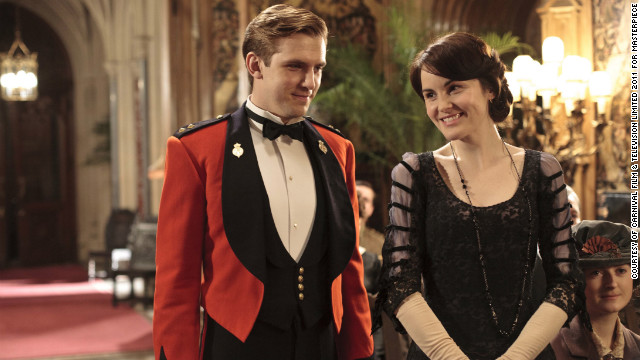 The series shows off the castle's sumptuous interiors. Here, Dan Stevens as Matthew Crawley and Michelle Dockery as Lady Mary share a scene.

(CNN) -- Lots of sexy, glamorous and irresistible characters make their way through "Downton Abbey" -- the television drama that's got audiences around the world fascinated by the intrigue inside an English manor house.

But to many fans, the castle is the real star.

So much so that it's transforming some viewers into travelers, eager to see for themselves what it might be like to live as a blue-blood or as a servant at the great mansion.

First stop: Highclere Castle, the fairytale-like 19th century property about an hour's drive west of London used as the setting for the series and part-time home of the eighth Earl and Countess of Carnarvon.

"It has been amazing," said Lady Fiona Carnarvon, describing the effect "Downton Abbey" has had on the family's life and the tourist demand to see the castle.

"We have so many e-mails now saying 'We love your home.'"

More than e-mails are pouring in. About 50,000 people came to see the house last year, compared to about 30,000 who visited before the series began airing in the U.K. in fall 2010, Lady Carnarvon said. American audiences see the show a few months later.

(The series has also inspired the countess to write "Lady Almina and the Real Downton Abbey," a book about a predecessor who converted Highclere into a hospital during World War I.)

Tourist demand is so great that the family is now asking visitors to buy admission in advance and is installing a timed ticket system to avoid having too many people inside the castle at one time.

Group visits are already fully booked for 2012, but individuals will be able to pre-book their tickets online starting next month.

Even the "Downton Abbey" actors are in awe of the setting.

"It's like walking into Hogwarts or something like that in 'Harry Potter,'" said Rob James-Collier, who plays the scheming footman-turned-sergeant Thomas Barrow in the series, in an interview with a British video production company last fall.

"It's the center of the whole show around which everybody else revolves," added Hugh Bonneville, who plays the Earl of Grantham.

For Lady Carnarvon, opening up her beautiful 300-room home to so many visitors just goes with the territory of being part of an aristocratic family.

"I think you have to look positively on it or you've married the wrong husband," she said.

"You have to want to share it, which we do."

Tourists aren't the only ones glad the family is sharing the estate.

The popularity of "Downton Abbey" is just the latest boost for the British travel industry, which has been riding high since the royal wedding last spring and continues to be red-hot with the approach of the Queen's Diamond Jubilee in June and the Summer Olympic Games to be held in London in July.

"Downton" is especially good at showing visitors that there is more to Britain than just "London-centric" landmarks, said Meredith Pearson, a spokeswoman for VisitBritain, the country's national tourism agency.

"This is just the most exciting time for British tourism. It's an unprecedented period of time to have so many incredible events taking place at the same time," Person said.

"[Now] 'Downton Abbey' is really showcasing the beauty of our countryside and quaint villages and all of the manor houses across the country. ... We had no idea that it would take on a life of its own. It's just become so popular."

There are lots of options if you want to visit Highclere Castle.

The house and gardens are generally open to the public on select days from Easter until September.

Since the castle was once the home of the fifth Earl of Carnarvon, who along with Howard Carter discovered Tutankhamun's tomb in 1922, the mansion also holds an Egyptian exhibition. Admission to visit the house, gardens and the exhibition costs £16 (about $25) for an adult.

For no cost, you can take walks within and near the estate.

Then again, if you'd like to get a more intimate look at the castle, there's a new, much pricier option that's being offered by NoteWorthy Events, a travel agency that specializes in the United Kingdom.

Owner Susie Worthy calls it an exclusive tour created in response to interest in the "Masterpiece Classic" series.

Do you and a few of your fellow "Downton Abbey" fans have about $12,300 to spare? If so, you can explore the castle, dine at the mansion and meet the aristocrats who call it home.

As part of the package, the Earl and Countess of Carnarvon will personally greet you when you arrive at the main entrance and invite you to tea and coffee served in the Countess' morning room.

You'll get a private tour of the State Rooms, before sitting down for lunch in the State Dining Room, complete with wines chosen by the earl from his wine cellar.

After the meal, you'll be whisked off to Beacon Hill, which provides sweeping views of the property.

End your day with high tea back at the castle. Up to four people can take part in the pricey tour.

Worthy wasn't aware of any takers yet, but said it's hard to resist the castle's allure.

"It's an escape from your humdrum life, really," Worthy said, noting that the grand manor lifestyle is attracting interest from lots of British travelers exploring their own history, as well as international visitors.

"It's another world. They want to leave their small house and go and see something wonderful, and they want to see lovely gardens and estates. They want to almost be part of it, although it doesn't belong to them."

Where else to explore

Beyond Highclere Castle, some tourists also head to the village of Bampton in Oxfordshire, where many of the exterior town scenes in the series are filmed.

A stop there is often standard in some of the "Downton Abbey" themed tours that have popped up in response to fan demand, such as the ones offered by Brit Movie Tours and Great British Tours.

Pearson recommended that fans inspired to check out other spectacular sites used in popular British films and TV shows -- including "Young Victoria" and "Pride and Prejudice" -- should visit the National Trust website for a map of filming locations in England.

Such "set-jetting" trips have become one of the most popular travel trends for American tourists in Britain, she said.

A trend only getting hotter, thanks to "Downton Abbey."